December, 2006
The condo complex, we found after we purchased, had a series of leaks in various buildings and units.  Wooden townhouses, like our unit, seemed to be more at risk and the board reported to owners that these problems stem from original construction deficiencies and were to be repaired as part of "Phase 1".  The board also took legal action to recover damages from the original builders which has grown into a lengthy process involving an army of defendants and lawyers.  Phase 1 was expensive and owners received cash calls to fund the work which was intended to completely repair the envelopes of two buildings.   Our unit would be included.   We supported the decision because a persistent leak had developed in our living room requiring us to protect our floor and furniture with plastic sheets.  The windows were also to be replaced as part of this Phase 1 and we were positive because it seemed as if we were going to have a brand new home--inside and  out. 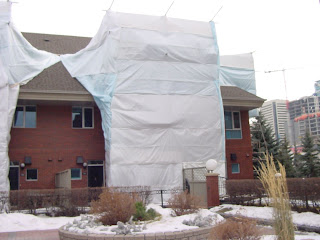 It was necessary to erect scaffolding and hoard the premises while exterior walls, windows and components were removed during this project.  We sat underneath this white shroud for a year as if living in fog.  When a strong Chinook wind blew into town our home would rock and rattle all night long.  Scaffolding would bang against walls, tarps would flap against the building.
Posted by Paul at 5:26 PM