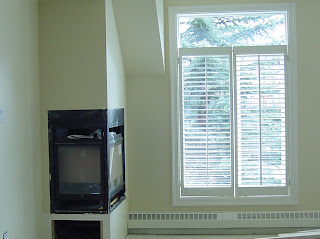 When a contractor does a large job there are progress payments and holdbacks until the job is certified as Substantially Complete. Contractors bidding on large jobs must buy insurance and pay for bonds and that is built into the price we pay.  In our case, a consultant can be hired to reconcile all the work and authorize payments.    If you have been reading this blog you'll understand that there might some question as to my belief that the work on our unit was satisfactory or that the contractors should have been paid.  Our unit accounted for 10% of the contract--more if you look at the square footage overall so it could be argued that "substantial completion" never occurred.  Although this insurance and performance bond was provided, the condo board never exercised it's right to call upon those instruments to rectify all the damage from Phase 1.   In one recent meeting (2009) a director remarked that "it is too difficult to go after these guys, it is easier just to pay to have it fixed".   The board left owners to absorb damage costs from contractors that it did not pursue through legal means, deductible costs on items that could be sloughed off onto the board's insurer (Co-operators) and it let owners like us pay our own costs because they knew we had no recourse if we wanted to live in our home.  "Home of Fiduciary Responsibility" is not a sign hanging on the board room wall.

Here is our window before Phase 1 started.  We had just renovated the interior.  This corner fireplace was added and the flooring was about to go in as the last step.  The wooden doors were painted in white trim to and the rooms were Elephant Tusk. It was a beautiful room.  Then Phase 1 came around to repair the exterior.

By the middle of the project, our windows coverings had been removed.  The casings were taken off and new windows replaced one or more times (don't ask why--it is a horror story and suitable for another day).   But, the new windows were a different size.  The window casings didn't fit and you can see in this shot how the smaller windows resulted in casings that don't fit the original opening.  This meant that everyone's window coverings would not fit and needed to be replaced.  The contract we paid for was supposed to handle these costs but the condo board didn't want to admit another mistake and simply told owners to "suck it up" and replace their own coverings at their cost.   The contractors, who bid on the contract specification, were able to perform this amateur installation, leave out important features and enrich themselves at our expense.  Once the contractors recognized that they could get away with small items they went "full tilt" and ignored the time schedule, cost targets, performed questionable work, left  out important contract items, failed to clean up the job site and ignored safety regulations.  Nobody on the board cared so why shouldn't a scum contractor care either?  It didn't. 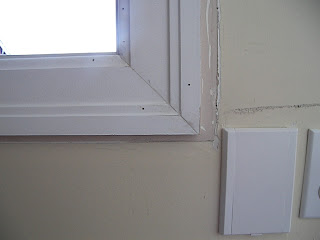 It gets better.  This window was "finished" and signed off as "completed" in the regular reports that the board received.   I didn't believe it so we opened the casing and.... 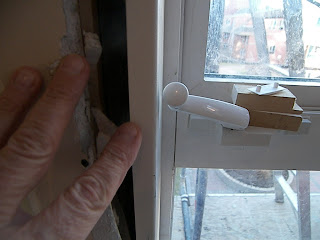 Not only was there no insulation in the area surrounding the frame.  These are supposed to be energy efficient windows but they left the cavity empty from the room straight to the outside wall.  The casing was set such that the roto hardware can't be turned without whacking knuckles.  Some windows didn't have the roto hardware so someone paid to have these windows cut open to install the latches and openers after the windows were fitted into the building.   Why would this happen?  Look at the next picture to see how they "screwed" this job. 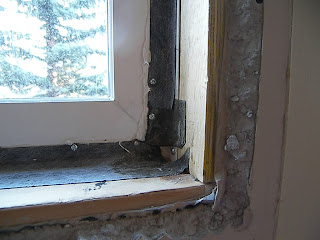 The installation is strange according to every expert brought in to look.   The PVC frame is attached with screws into the frame on all four side and anchored with 1-inch angle on all four sides.   The window is hard mounted to the building frame with no float.  If the building contracts or moves with the seasons then these windows are going to twist and squeeze and get pulled.   This black "tape" stuff has only been explained in bizarre concepts.   The 40-50 screws into the PVC are unexplainable by anyone but they have destroyed the integrity of the PVC seal and we just lost about two inches of border.  I asked for drawings that should be part of the contract--zip.   I asked for drawings from the window manufacturer Starline and was told the installation does not match the company's generic drawings.

This is the way our "new" windows were left after $millions in cost.   "Substantial completion" was certified by the consultants despite arguments that monies should be held back for damage and repairs to our unit.   It didn't happen.   The contractor threatened to lien the premises, the board got wobbly knees and paid in full promising to fix our home but conveniently ignoring that for the next three years.   We have never seen a dime from that contractor or the fools who approved all this work.  They were all paid in full and over contract amounts despite continuing deficiencies to this day.  The board members remain "sympathetic" to our situation that they caused but haven't got the knowledge or the fortitude to insist that contractors make good on contracts and work quality.   The board is content to let owners suffer the results rather than doing the hard work and challenging contractors who are pros at scamming jobs like this.   Ten units were "repaired" for something around $3MM and our unit remains uninhabitable three years later.

The bigger question remains.    If our sample of windows revealed that there was no insulation and that they leak when tested properly then what does that say for the rest of the complex that was completed by the same contractor?  Statistically, are we the only ones out of the 100+ windows that didn't get installed fully and properly?   I can only say that when independent contractors wanted to remove windows for inspection they were fired.   When the Phase 1 contractor was to deliver a "mock up" of the window installation for reference, it was missing and never recovered.  When drawings for these windows above windows were requested, they were never produced.  It could all lead someone to think that this was a batch of poorly fitted windows, behind schedule, over budget so let's put them in, cover them up and hope nobody notices. I could be wrong.