June 2008 Time to do repairs ourselves 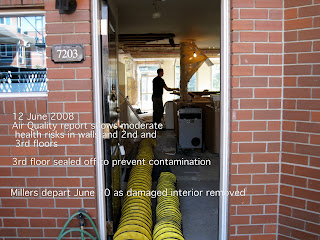 ING Insurance Canada boasted that we had the "best condo policy in Canada" (this link is a 3MB policy booklet).   When we contacted ING to claim on our policy they refused to meet us and denied any coverage whatsoever.

June 2008:Time to repair.  It was now more than a year since the first disaster and six months since the board's contractors left the site.  I was getting sick in our bedroom at night yet my symptoms would improve when I left the unit. The board's property manager hired a lab to perform airborne and swab analyses in our home.   When the results came back we were told to seal off our third floor.   That appeared to be the motivation to finally get the board to hire the right people to remediate our place.   But when they showed up to start work, a board member intercepted them and ordered the workers away.

We were infuriated.   On advice of counsel we were forced to hire the experts ourselves and proceed with the repair at our cost.   Our experts informed us we had to leave during the work so we rented another condo and moved out.  The professionals came in and removed and cleaned everything, stored it and put it away for our return. 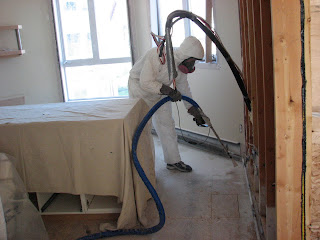 Contractors Strike Again!  Later in the summer of 2008 our work inside was progressing quickly.  The interior had been removed and the structure had to be sanitized, foamed and drywalled again.  Then the board brought in another contractor to replace the roof and decks outside our unit.  This was important because all three of our decks reside above living areas.  Any leaks would damage our latest interior repairs not the mention our neighbouring units that had families and fully furnished interiors.  But I sent a letter to the Property Manager just to be certain that this contractor would be insured and bonded.  I asked that the exterior be properly hoarded to prevent any possible leaks and I asked for a copy of the contract.   I never got a response.

Lightning Strikes Three Times   In August 2008 the new board contractor began removing portions of the exterior but failed using only thin partial pieces of plastic to cover the work area--our worst fear.   It rained and for many days our interior suffered more water damage.   Our contractors, still working away inside had to pull down the new drywall, rent dryers and eventually sent the crews home because the water damage kept coming.    The board's contractor ignored us and neither cleaned up his mess nor paid for the damage.  The board refused to respond and we sought an injunction from the Court of Alberta to stop the work and properly hoard the exterior.
Posted by Paul at 5:49 PM