No end in sight yet

Earlier this month, a contractor with experience was brought in by our board to test the exterior decks and windows by using water to see if things would leak.  This was contrary to the last professionals who refused to use water because of the risk of damage.    We agreed with that assessment because we've had too much water damage already and the board has not paid for the problems it caused so why risk more damage?

It was rumoured that all of the units (our neighbours) in our building would be tested but that made little sense given the interior furnishings, ongoing habitation and possible damage.  Of course, our unit is partially gutted with no floor and we have people ready to open walls and ceilings if the board causes more water to infiltrate again. 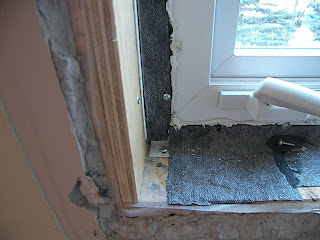 My trusted interior contractor watched all the proceedings and tests.    A substantial test with water was performed on the new windows installed a few years ago.  A picture of the "professional" installation of the new windows is shown above.  Note the PVC frame is attached with metal screws into angle pieces that are attached to all four side of the window and attached to the building frame with no float.  If the building flexes then those frames are going to be under a complex set of loads.  The weird tape and goop and screws into the PVC frame have been described as "never seen before" by five firms who have viewed the installation.  The only firm to suggest the installation is perfect is the consulting firm that oversaw the project.   Surprise.

The decorative PVC white frame that should be the centerpiece of the window was left soiled as viewed, covered in this mystery tape.  Is it square?   When a square is placed on the frame it rocks on all four sides of the window frame.

I am told these windows failed which was no surprise since we could see air gaps and the windows let air in when latched.  Some latches were not even installed yet everyone was paid fully.   The water test was basically a waste of time and money as it only confirmed the windows leak.

We were told by the board chairman that any window that leaked will be replaced.   I doubt the board will live up to that commitment.  They will probably try to fix this on the cheap rather that fix what must be considered an unprofessional installation    This is not to say that Starline products are junk.  Probably they are acceptable in BC but they lack the specifications for Alberta winters according to installers who viewed the installation.  I can't imagine that the manufacturer will do anything to make this right since the frames are pierced, twisted and years old now.

On the other side of the condo we had Gienow windows that were supposed to be replaced years ago with this Phase 1 project but got missed.  The one year project ended up with old windows that will eventually have to be replaced.   You would think that a project of $3MM with 100 windows would not leave a few older ones un place but it did.  I am told these windows were tested and the seals were "blown out" so that they must now definitely be replaced.  That was a very useful test. 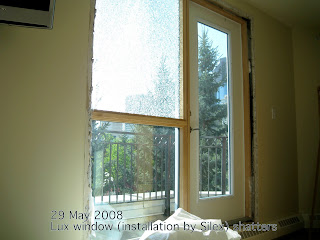 This unit, a Lux window, was installed by Phase 1 contractors.  It leaked and eventually broke one day without anyone's help.  You can see that date on the photo is May 2008.  It was installed in 2007.   It was only in September 2009 that the condo board stepped up to order another one.    It was February 2010 when it was installed and, amazingly, it was installed by Lux in such a manner that the The City of Calgary issued a stop work order until it was fixed properly.   Then, this past May it was re-installed for a third time.   Nope, still not correct.   I am told that Lux failed to install a pan gasket that would--get this--prevent water leaks.  A fourth try was performed this month June 2010, three years later and we're told it looks good this time.

Four times and 3 years to get a window properly installed.  Who's getting paid each time you might ask?  Good question.  Why are the same incompetents still running the show?   Another great question.

Our board has stopped talking to us for two weeks now.  We told them we wanted to work on the interior and after this "test" they stopped all communication.   What appeared to be movement forward has gone back to a legal mode.  No insurance issues have been dealt with, no response on these leaking windows has been forthcoming and PIE won't tell us what they are going to do, or when.   So, our interior remains at risk for 2010 until someone finds the ability to stroke an email or a cheque.

Why are the same people still in charge of this board project?  Good question.  I understand the entire board was re-elected or acclaimed this month.   Such stellar performance regarding our home certainly is a reason to be brought back for another year.
Posted by Paul at 11:05 AM