It's the landing that is painful.  You would think safety would be a high priority for a condo association especially when the City has already sent warnings.   Phase 1 was supposed to repair all of our decks because they exist over living areas and the draining systems go through walls which have been a problem since original construction. 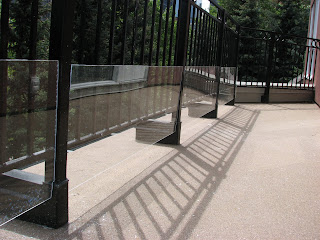 Phase 1 did not repair our decks despite the millions of dollars spent.   I was familiar with the project at the time and I cannot recall seeing credits for all the work that was not completed.  It just went way over budget and it appears owners paid at least twice for the work.

Almost a year later, the decks were done at additional cost.  In fact, much of the work done in Phase 1 was ripped apart and repaired again.   It made no sense but we went through a second phase of work with more leaks from contractors and the board still refused to fix the damage.

When all the exterior work was done, the contractors put back the same old railing and it did not meet safety code.    You can see in the picture that the parapet in the background was removed from the foreground.   Water, dogs, tools, small children could now roll off the deck under that gap and fall three stories.  Of course, the mindless contractors didn't even have a building permit and the City stopped the work.  A building permit requires drawings and approvals for modifications so you can see how these guys keep trying to do things "cheaply" and end up spending multiples of what it would have cost with the right people and proper project management. 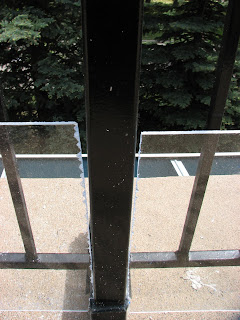 Eventually, these plexiglass temporary fixes were put in.  That was two years ago.   I'm not kidding, even the city inspector has retired while we wait for "drawings" to be produced by the condo board.  I've heard that excuse perhaps a dozen times now over the years.  But look at the plexiglass "fix".   The City inspectors permitted a plexiglass panel to stop kids from crawling under the railing but have allowed a step from which a youngster can now climb over top the railing and fall three floors.   This is the mess that develops when there is no plan and people try to make last-minute fixes.

Just recently, the new City of Calgary inspector called and arranged an inspection of the "temporary" railings this week.   It was reported that large gaps still exist large enough to violate Safety Codes so I'm hoping these things get fixed and made safe.

My summary is that the board permits sloppy work to continue on the premises.  Based on my experience it continuously fails to make contractors pay for damage, fails to insist that proper permitting and safety issues be followed and has no intention of making good on damage that it is clearly responsible for.

And, they just got re-appointed this month (June, 2010) for another year because nobody else wanted to run.  Hallelujah.
Posted by Paul at 10:46 PM